Introduction
Within this topic I wanted to address the concept of manipulation, to somewhat play with the contrasting idea of what is real and what is fantasy. I will do this by looking at two photographers, Victoria Siemer, who alters her photographs before printing to imply how she adapts her own life to fulfil her imagination, whereas my other photographer, Lucas Simoes, manipulates the images afterwards to suggest the destruction of reality.

Victoria Siemer is a conceptual graphic designer based in Brooklyn, New York. As a creative artist Siemer adapts visual spaces to create an unusual visual effect. Her manipulation of both people and landscapes has led to her being known as ‘Witchoria’, contemplating her photographs it does not take long to see where this name originates from, as her work deals with emotional and visual disintegration, which originated from her college thesis.
Most famous for her recent series ‘Human Error’, Siemer creates the photograph by overlaying an existential or lovelorn computerised error message and scans it on to a Polaroid image. The selection of the photographs appears to be random and without the “error” message, it would somewhat appear emotionless and less meaningful. In most of this series, Siemer uses the typical heart break, teenage quotes to possibly highlight Siemers own encounter in her past affairs to fulfil a depressed atmosphere. 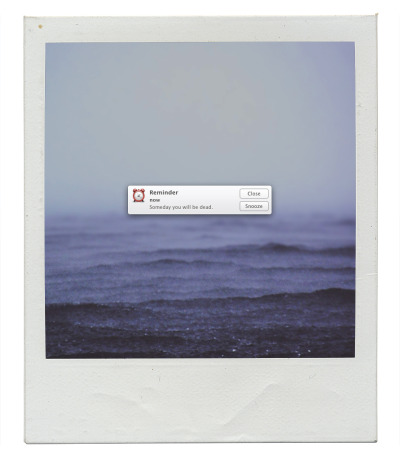 Within the photograph ‘reminder’ it displays a morbid, nostalgic mood, to somewhat signify how nothing lasts forever; everything must come to an end at one stage in everyone’s life, this situation can be fulfilled either with happiness or with great sorrow and disbelief.
Typically when looking at any Polaroid picture, we associate it with a previous generation, therefore we immediately assume it is old; so in this instant, within the image “Reminder” you are able to recognise how this frequent fact of life: “Someday you will be dead” is repeating itself throughout previous generations, and it will continue to do so in the future.
Also with Polaroid’s, the photographs are ironically printed instantly to capture and to preserve a moment, a memory, as a hard copy in comparison to the unreliability of a modern technology such as a mobile phone.
This instant nature of a Polaroid photo can also be compared to the message displayed which is short and sharp, instantly grabbing the viewer’s attention. However once the photograph has the viewers’ attention, the bleak and morbid quote contrasts with the fast characteristics of both the Polaroid photo and the profound message, by making the viewer reconsider and indulge in deep thought over the drastic issue mentioned. This contrast therefore marries both speed and long contemplation in one image.
The blue tones of the image give it a sad, depressing quality; the presence of fog possesses a cold quality to the image which matches the blues in the sea. The shallow depth of field suggests a large aperture of possibly f2.8 or f4 which in turn creates a sharp drop off in focus. This aids the overall feel of the image, suggesting there is little hope, or that our lives are fading away in front of us.

Lucas Simoes is an artist based in Sao Paulo, Brazil, who has a background in architecture and design which explains his accurate use of geometric shapes within some of the photographs. With the combination of collage and use of fire to manipulate the face, it provides a sense that artist is attempting to destroy a memory the photo holds, arguably this could symbolise Simoes’ detachment of his own past, or simply it is somewhat too hard to reencounter.
ImageSimoes created a number of series for his work, with fire being a recurring theme amongst the majority of them. However one series titled “desmemorias” the Spanish for ‘un-memories’ explores the loss of people and friendships from his life, as he layers the photograph ten times manipulating their faces, representing their removal from his life. The other series all draw on the aspect of fire, “Adios”, “Nostalgic”, “Absence” and “Who play with fire”, they all play with an element of destruction and manipulation of the human face to physically erase a memory, which contrasts my previous photographer, Siemer, as she somewhat preserves the memory through the instant nature of a Polaroid camera.

Image Analysis
Within this image, we are able recognise how the burning technique is in a controlled manner to somewhat suggest Simoes intent of controlling and altering someone else’s memories or even the person within.
My initial thought when looking at this image, was how this person could be perceived to have magical influences due to the glow which forms around him. However it also appears that something is stopping him from looking through the window, providing a concept where the model is stopped from seeing something which could alter his perception, a perception that there is hope within the external environments.
Before the burning technique took place, I believe this photograph captured the first encounter after washing, due to the towel being used to dry the hair and by the placement of the model being by the window it could simply suggest how he is looking what the weather is on this particular day.
Also there appears to have a vintage effect used, as the corners somewhat to appear darker to the rest of the image, this suggests how the photographer desires the image to be old looking to show the issues within modern society today. Due to modern technology, hardly anyone looks out the window to determine what the weather is or even what their mood will be like on each day, instead many use their mobile phones to check the weather to even see whether they should go out that day or even that week, now many do not have to leave the house to socialise, they can use multiple networking sites within the confined space of their bedrooms instead of being within nature and the natural, refreshing air the external environments provide.
Through my own burning experiments, I believe Simoes process consists of burning prints from film due to the orange tones and small dots as when the prints are burnt tiny bubbles can form. I also believe this photo is burnt with either a candle or lighter, with the underarm closest to the flame which has caused the surface of the paper to melt rather than simply change colour. From my own work I have discovered that burning with the portrait facing the sky it would have formed a larger bubble like in example A in the previous photographs shown above to somewhat create a blistered effect.

Conclusion
In conclusion both Victoria Siemer and Lucas Simoes portray the concept of manipulating memories. Siemer does this by drawing on the previous sadness she experienced in her own life in an attempt to manipulate the viewer to recall dark memories from their own life. In contrast to this Simoes attempts to erase the sadness from his life through the use of his work, rather than recall sadness for the viewer. This is represented by the manipulation of his photographs through the use of fire. This inspired my own work as I explored Simoes’ use of fire to manipulate faces in my own photographs, both before and after printing. Furthermore I developed the concept of looking through the manipulated photo to display how memories can be altered, and through the use of layering a material or alternative photograph behind the burnt image i portrayed the concept of destroying one memory but creating a new one. I was also inspired by Victoria Siemer’s manipulation of landscapes and use of Photoshop within her ‘error messages’ collection as I explored this technique to rotate and reflect parts of portraits to manipulate the faces. Therefore both Siemer and Simoes inspired me to explore the manipulation of memories and people through a range of techniques. If I was to extend the topic further I would like to explore the contrasting idea of preserving memories rather than destroying them. I would attempt to do this through layering/plastering images/objects in order to emphasise the concept of protecting and preserving memories.
Above all I was most fascinated by the comparison between Simoes’ use of destroying memories to terminate the past and Siemer’s use of morbid, depressing images which somewhat destroys all hope for the future. This concept will continue to inspire me throughout my work to come.

This is Colossal – Victoria Siemer