Aperture; what are you, tell me your secrets!

noun
1. an opening, hole, or gap.
“the bell ropes passed through apertures in the ceiling”

When you take a picture, you don’t want it to be too dark or too bright, right? The control of that is called exposure. Controlling the exposure means you control how bright/dark the image is. Aperture is one of the three components of exposure. The other two being shutter speed and ISO. Have you ever wanted to know how to blur the background in a photograph? The thing that controls that, is the aperture. It’s not an effect or an Instagram or Photoshop filter, it’s a mechanical movement within the lens. Let’s get into it.

Aperture literally means a hole, an opening or a gap. A window can be an aperture, a vent or passage can be an aperture. Because we love the English language and all its subtleties, we must wrap context around a word in order to better understand it.

In the context of photography aperture is: “a space through which light passes in an optical or photographic instrument, especially the variable opening by which light enters a camera”

Basically, a hole that opens and closes, controlling the rate at which light can get in.

Takeaway: what is the aperture? – it’s the hole in the lens that lets in light

What the hell is an F number?

The aperture ring on the lens is calibrated with a series of progressively increasing numbers that can seem confusing at first glance. The series usually starts at 2, 1.8 or 1.4, and increases to 4, 5-6, 8, 11, 16, and perhaps further to 22, or even 32. The numbers, in fact, are far from random, as closer scrutiny reveals; the series double at every other value. f-stops, or f-numbers are a measure of the size of the lens aperture. Each number though, is not the diameter of the aperture, it is the number by which the focal length of the lens must be divided to yield the aperture diameter. The numbers can be written as f/2, f/16 and so on – f being the abbreviation for focal length. For example, when a 50mm lens is set to f/2, the diameter of the aperture is 50/2, or 25mm. When referred to in speech, the numbers become ‘eff-two’ and ’eff-sixteen’ the oblique line is ignored.

This may seem like a very complicated way of measuring the power of a lens to transmit light. However, it has certain advantages. Telephoto lenses form a magnified view of the subject, compared with wide-angle or standard lenses. So the light from a given area of the subject is spread over a larger area of film with a telephoto lens. This means there is less light for any given aperture diameter. The f-stop system gets around this problem because it is independent of focal length. An f-number is a ratio, not an actual measurement, so an aperture of f8 on a 50mm lens admits exactly the same amount of light as an aperture of f8 on a 400mm lens.

This is important when changing lenses. A photographer who is switching from one lens to another can maintain the same f-number on both lenses. If the aperture was measured in millimetres. instead of as a numeric ratio, lenses of different focal lengths would need to be set differently.

Why then the curious progression of numbers? Again the choice is quite logical. Each setting of the aperture ring lets through twice as much light as the one before, so with the lens set at f/4, the image on film is twice as bright as at f5.6, and half as bright as f2.8. This doubling/halving sequence may be familiar – shutter speeds increase and decrease in a similar manner.

Note, though, that large f-numbers let through little light, and small f-numbers, such as f2, admit very much more light.

When starting out in photography, this is often one of the first things that people want to be able to achieve because let’s face it, it looks cool.

Depth of field is directly proportional to aperture, and the depth of the field of focus is at its most shallow at wide apertures. Stopping the lens down to smaller apertures increases depth of field, bringing more of the subject into focus.

When you need the entire image to be sharp, you need to stop the lens down to a small aperture, such as f11 or 16. However, great depth of field is not always desirable, and a photographer may deliberately choose a wide aperture to reduce the depth of field – perhaps to blur an unsightly background behind a portrait subject.

Aperture is not the only factor that influences depth of field. Focal length and subject distance do too. Long focal length lenses (see lens types) have shallower depths of field, and wide-angle lenses more depth of field. This is because long lenses compress perspective and make objects appear closer together.

Here is an example of how depth of field effects an image. A wide aperture of f/2.8 has been used. The image was manually focused so the Baby Blue Hubbard Pumpkins were sharp. Shooting with a wide aperture of f/2.8 has created a shallow depth of field, the effects of which can be seen below. There is a field of sharp focus, in front and beyond that field the image becomes increasingly out of focus. 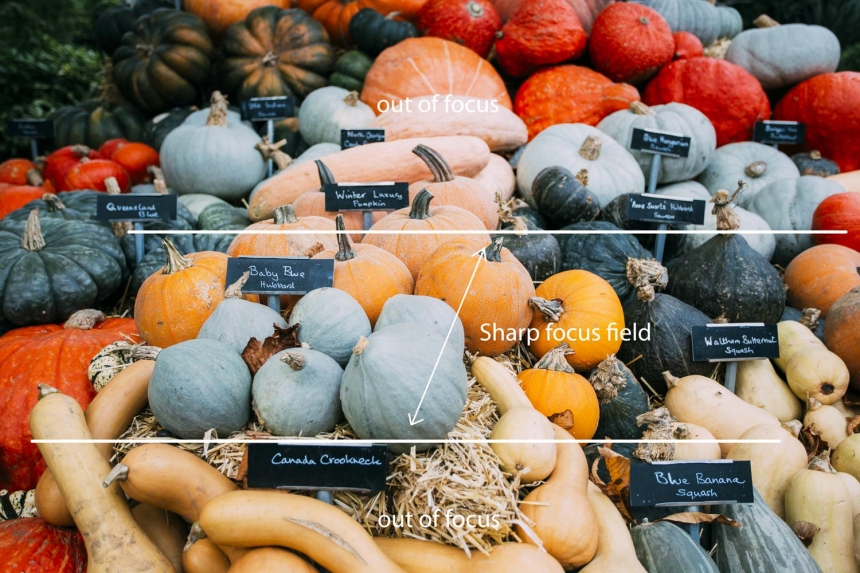 What better way to explore aperture than with cake? This image was shot at an even wider aperture of f/1.4. The depth of field is so shallow that the flowers at the front of the cake a pin sharp and the icing and lettering at the top begins to be rendered out of focus, a distance of approximately three inches. The flowers in the background are completely out of focus. Shallow depth of field can be a wonderful tool in composition as it can render unsightly objects in the background out of focus. 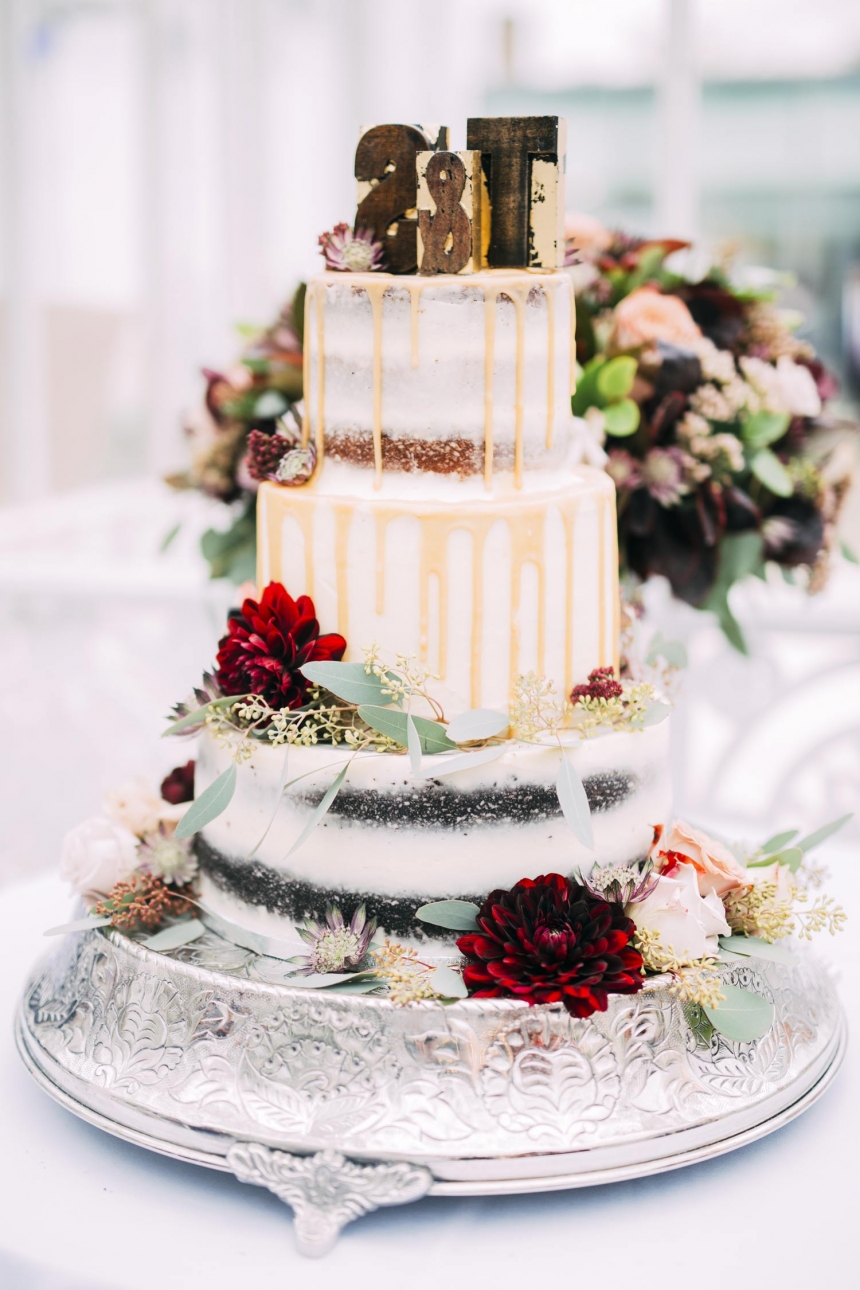 Don’t forget, depth of field also works on objects in the foreground.

On SLR cameras, the lens is set to full aperture until immediately before exposure, the purpose of this is to let as much light into the viewfinder as possible. If it adjusted the light levels as you changed the aperture the viewfinder would become too dark or too bright and composing the subject would become difficult. Cameras have what is called a depth of field preview button. It varies in location depending on the camera manufacturer, see the instructions to find yours. This will set the lens to the aperture selected to give a more accurate depiction of the final image. Personally I’ve never found this particularly useful, but what is really useful is the markings on the lens itself which allow you to calculate depth of field relative to distance.

You may have seen that your lens has a little infinity mark on it. When focussed to infinity, the middle ground of your photograph will be in focus, however the potential depth of field at the other end of the scale is wasted because nothing can go beyond infinity. The wasted part of the depth of field can be put to use by positioning the infinity symbol opposite the depth of field marking for the chosen aperture. The entire zone of sharp focus will then be on the near side of infinity and more of the picture will be sharp.

Summary
what is the aperture? -it’s the hole in the lens that lets in light

Camera modes: Aperture Priority – you set the aperture, the camera does the rest.